The UK government has announced that mobile providers are to be banned from purchasing and using Huawei 5G tech by 31st December of this year.

Digital Secretary Oliver Dowden also revealed that UK mobile networks must completely remove all of Huawei’s 5G equipment kit from their networks by 2027 at the latest.

Mr Dowden said of the ban: “This has not been an easy decision, but it is the right one for the UK telecoms networks, for our national security and our economy, both now and indeed in the long run.”

Huawei is very disappointed with the ban, and said the decision is ‘bad news for anyone in the UK with a mobile phone” and will “move Britain into the digital slow lane, push up bills and deepen the digital divide”.

But what effects will the ban have on consumers? Does it mean you can no longer use Huawei phones? Will it have an impact on the ongoing 5G rollout? Let’s take a look at what the Huawei 5G ban could mean for you.

Can I still use my Huawei smartphone?

Yes, you can still use your Huawei devices as normal. The ban will have no impact on how your smartphone works.

The ban is focused on the Huawei tech found in radio masts and the telephone exchanges the networks use to provide services, and not individual devices sold to consumers. So it has no impact on any Huawei devices you may have at home such as your tablets and smartphones.

However, the aforementioned Android ban does mean that Huawei products released after the ban was imposed in May 2019, such as the flagship P40 series, won’t come with Google services such as the Play Store, which has a big impact on the apps you may use on a daily basis. However, Huawei is working closely with app developers to create comparable apps and to bring existing apps to the Huawei App Gallery.

Will it affect the 5G rollout?

When it comes to getting 5G connections established throughout the UK, it looks like the ban may impact the current plans.

In fact, Digital Secretary Oliver Dowden admitted it could actually set the rollout back by "two to three years". This is because Vodafone, Three and EE’s 5G activations are all reliant on Huawei tech, and they’ll now need to source new equipment from another manufacturer.

As a result, areas that currently have 5G, like parts of London, will continue to have patchy service that’s nowhere near as fast as it could be, and areas that are still waiting for 5G to be switched on will have to wait even longer.

Will the ban affect home broadband?

The UK government has previously promised that the whole of the UK will have access to a gigabit broadband connection by 2025. This would require fibre cables being installed throughout the country, which is a pretty big task on its own.

But now that Huawei’s tech is no longer an option, this could take longer than originally planned.

As part of the ban, the National Cyber Security Centre (NCSC) has recommended that broadband providers don’t use Huawei’s fibre access equipment. At the moment, Nokia is the only other company that makes similar tech.

Shifting away from Huawei’s fibre tech isn’t a legal requirement just yet, and discussions between the government and broadband providers are set to take place to explore alternatives and solutions.

Huawei tech is also found in street cabinets, which help many people who are on slower internet connections access their service.

So if it comes to a point where Huawei fibre tech has to be written out of the plans, there may be a delay to the nationwide gigabit broadband target, as well as a costly replacement of existing street cabinets.

However, the removal of Huawei 5G tech needs to be completed by 2027, which does give ample time to hit the 2025 gigabit broadband target.

How much will this all cost? Will it lead to higher bills?

It’s currently too early to say how the Huawei 5G ban will impact your bills.

It’s estimated that the 5G ban could add a whopping £2 billion onto the cost of upgrading the country from 4G, and this is something that Huawei claims consumers will feel in the way of bigger bills.

However, some reports have suggested that mobile phone networks, including Vodafone, will attempt to offset some of the extra costs by asking the government to reduce the fees involved with purchasing airwaves that are needed to offer 5G connections.

Everything you need to know about Apple’s next handset.

The best mobile games of all time

Which one is your favourite? 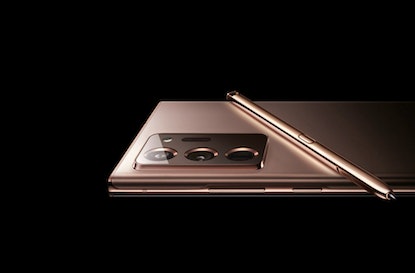 What you need to download to order a drink.