Music has always been a big part of bringing people together, and the last 12 months have been no exception.
Share this guide 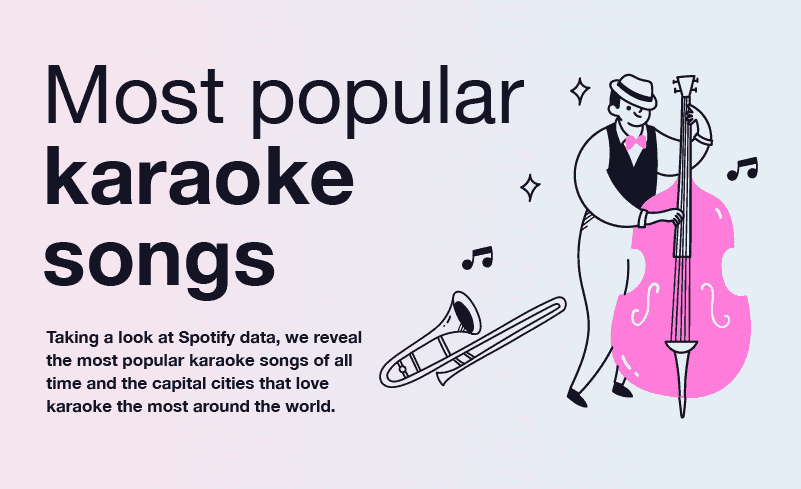 Records have been broken on Spotify and YouTube while karaoke machines have even seen a 168% increase in sales on eBay as people turned to music during the pandemic.

And with bars slowly beginning to reopen around the world, the broadband team at Uswitch were keen to find out which countries were home to the biggest fans of karaoke, looking at which songs are the most loved and which genres have the biggest satisfaction rate.

The most popular karaoke songs of all time

With thousands of potential hits to choose from, we wanted to take a closer look at which songs are most likely to raise the roof, rather than clearing the room when you hit the stage.

As it’s one of the most popular music streaming services, we analysed the 15 most-followed karaoke classics playlists on Spotify, which unearthed over 1,000 karaoke bangers. These were then ordered by the number of playlist appearances, their Google search volume*, YouTube views and also how many likes and dislikes each song had, to determine the world's most-loved karaoke classics.

The most popular karaoke songs of all time

‘Hotel California’ by The Eagles topped the list as the most popular karaoke song, scoring 381/573 on the index. While the song still had more YouTube dislikes than any other in our study, the accompanying lyric video racked up over 600 million views, making it the most popular song in the study.

It’ll come as no surprise to music fans that The Eagles reached the top of our Index. Not only is ‘Their Greatest Hits’ album the fourth best-selling album of all time, but rock music and its sub-genres make up 60% of the best selling albums of all time list.

Adele’s ‘Someone Like You’ took second place on the Index, with a score of 363/573. The 2011 hit, which became the third-best-selling song of the 21st century, transformed Adele into an international superstar, and is well-known for its melodic high notes, making it the perfect song for karaoke stages across the world.

Other notable songs were Queen’s ‘Bohemian Rhapsody’ which reached 28th place and was the most ‘liked’ song on YouTube in the study; and Idina Menzel’s hit, ‘Let It Go’, from the film Frozen, which was the second most disliked song from our study - after Hotel California - but still managed to reach 31st place on the Index.

These are the most popular karaoke songs around the world

While karaoke is enjoyed by people all over the world, not every country knows all the words to Robbie Williams’ ‘Angels’ quite like the Brits do.

That’s why we wanted to take a look at search data from 20 countries to discover which songs are the biggest crowd-pleasers and what songs you should be avoiding when you hit the karaoke bars on your next holiday. 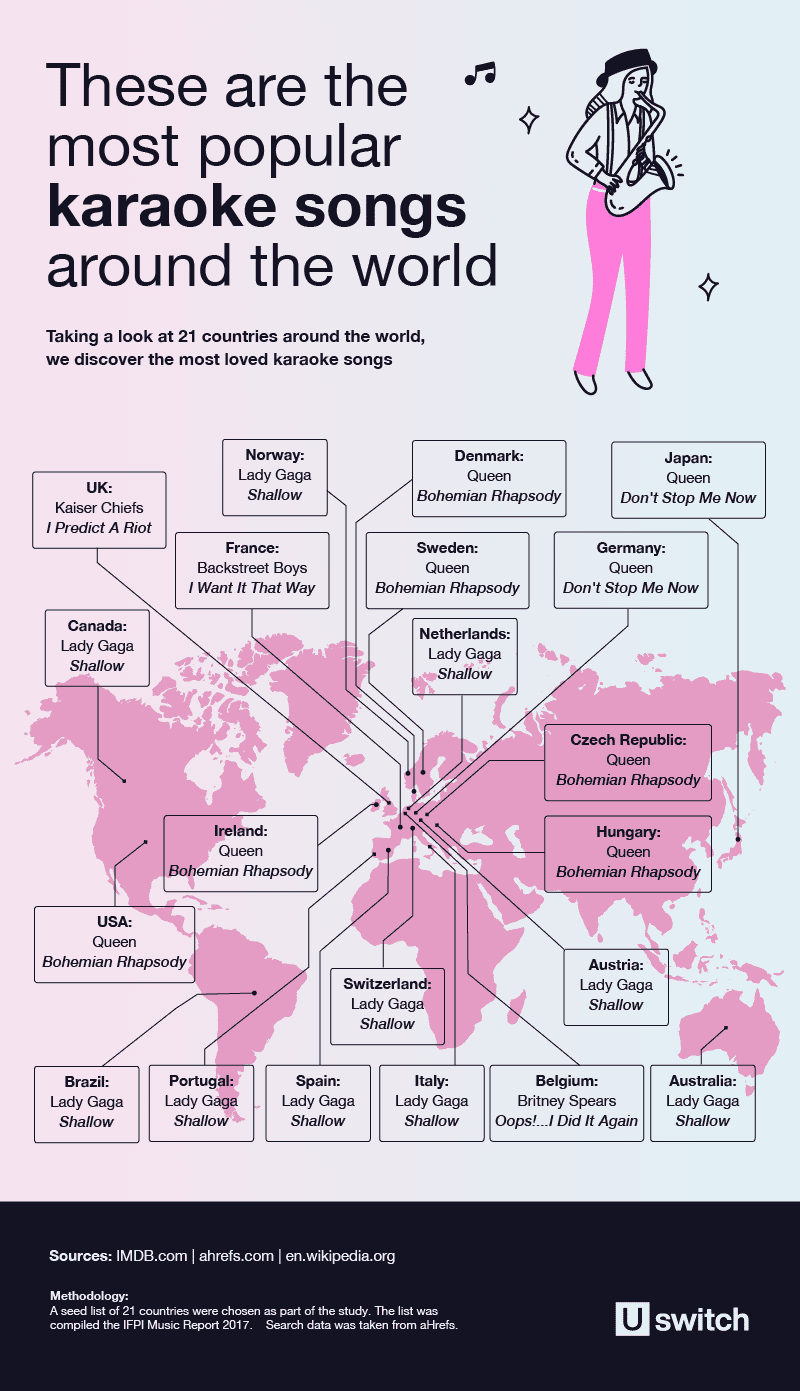 Most popular karaoke songs around the world mapped

Back by popular demand, the most popular song across the world was revealed to be Lady Gaga and Bradley Cooper's hit ‘Shallow’ from box-office hit, A Star Is Born.

Charting highest in ten countries including Spain, Norway, Switzerland and Canada, the song is known for its high-hitting notes from Gaga and makes for a great duet.

Second on the list was Queen’s ‘Bohemian Rhapsody’. The iconic track topped the karaoke charts in six different countries including the USA, Sweden and Ireland.

The song, which was first released in 1975, found even more popularity thanks to the 2018 film by the same name which strengthened the groups’ popularity and the catchy tune once more.

Other hits that were popular around the world were ‘Don’t Stop Me Now’, another hit from Queen, and Backstreet Boys ‘I Want It That Way’, which was most popular in France.

When it comes to karaoke, what types of music tend to please the crowd the most? Is it a soft, slow ballad or a classic rock tune that sees everyone getting their lighters in the air?

Taking a look at the top 200 songs, we analysed the genre of every song to reveal that it was pop music that reigned supreme when picking what to put on the box.

Pop is the most-loved genre for karaoke, with 40 poptastic songs falling within the genre, that's over a fifth (21%). Interestingly the sub-genres pop rock and dance pop were also in the top 10, accounting for 11.4% and 7.6% of the most popular karaoke songs.

Pop and Classic Rock songs also dominated in the top 50 songs featured within the Index. Each genre accounted for seven out of the 50 (14%) songs. Meanwhile, dance pop was the third most popular genre in the Index, accounting for five out of 50 songs (10%).

Most of us have a go-to song for karaoke, but what about a go-to artist? We gathered the top 20 artists featured in karaoke playlists on Spotify along with their total streams on the platform to discover which artists were the most loved.

In joint first place, the most popular karaoke artists were Queen and Maroon 5, scoring 86/90. Queen had nine different songs featured across the 15 Spotify playlists, while Maroon 5 had five songs in the playlist, but the second-highest number of streams on Spotify.

The most-streamed artist was Justin Bieber with 76 million streams, but his songs only featured across two playlists, meaning he placed third in our study.

Bryan Adams, who had the most songs featured across playlists (11/15 playlists overall), placed 19th on the list. The song most heavily featured was ‘Summer of ‘69’, which was included across eight different karaoke playlists.

The study found that songs by men also accounted for almost three quarters (72.8%) of the songs from the seed list, highlighting the major gender disparity artists face in the industry.

Here’s where you can plan a karaoke-friendly city break

As bars around the world slowly begin to reopen, we wanted to take a look at the best cities to visit for a city break sing-along. We looked at 20 capital cities around the world that have a western musical influence and the number of karaoke bars in each area.

Karaoke bars around the world

Second on the list was Dublin in Ireland with 3.7 bars per 100,000 people. The city, which has a population of 1,241,953, also favoured Rock music more - the most popular genre in two other countries.

Tokyo, a city well known for its private karaoke rooms, surprisingly had fewer bars than other cities for its larger population of 37,339,804. With 104 bars around the metropolitan area, this worked out as 0.28 bars per 100,000 people.

However, if you aren't ready to hit the karaoke bars quite yet, make sure you compare broadband deals to make sure you have the best connection to sing the night away at home.

Catherine Hiley, broadband expert at Uswitch, says “Research has shown that music is one of the most powerful tools in bringing people together, from the catchy melodies that take us back to old memories, to lyrics that help unify a room of total strangers.

“As we slowly start to see restrictions ease up around the world over the next couple of months, music will be at the core of our festivals, clubs and other nightlife that we have been waiting to get back to for so long.

“Our research set out to discover which songs would play an important part in our most hotly anticipated nights out, and which would guarantee to bring the crowd together.

From Run DMC to Fleetwood Mac, many of the songs on our list are even inspiring a new generation of song lovers over on TikTok, proving how pivotal these songs will be in the coming months to unite us all.”

*Google search data has been taken from aHrefs. This gathers the average number of searches per month over the last 5 years. Data gathered 26/04/2021.

**The number of bars used within the study is an estimation taken from Google Maps and can not be officially verified. Data gathered 04/05/2021.

For our initial seed list, we took 15 of Spotify’s most popular playlists labelled ‘Karaoke Classics’ to gather over 1,000 songs’ worth of data. Popular playlists were established by the number of followers each playlist had.

With 191 songs from the seed list appearing in two playlists or more, data on these 191 songs was then gathered, including the number of playlist appearances, their Google search results, YouTube views and also their likes and dislikes, which were then scored between 1-191. Each score was tallied up to give a final score out of 392 (YouTube dislikes featured a minus score).

Most Popular Karaoke Songs Around The World

Using the 191 songs from the Index, each of these songs’ search data from 21 different countries was found. The list of countries was compiled using the IFPI Music Report 2017 and repeated top-charting countries from several of the highest performing songs within the study. Countries that didn't tend to show a western influence within the search results were omitted from the study for authenticity and accuracy purposes.

Search data was found using aHrefs by searching for the song name and “lyric”. The search data number represents the average number of monthly searches from the past 5 years.

Using the 191 songs from the Index, each song was given one of 29 different genres which were taken from Chosic. The data was then cross-referenced to find the most popular genres.

Again using the 191 songs from the Index, we then explored how many times each artist or band had a song feature in one of the playlists. This included multiple songs from artists in the same playlist, meaning artists could score above 15 for the number of playlist features. Spotify was again used to gather data on the number of streams from the artists’ page.

Karaoke Bars Around The World

The capital cities from the 21 countries used in the ‘Most Popular Karaoke Songs Around The World’ were gathered using World Data, and populations of each city were gathered using World Population Review. Google Maps was then used to find an estimation on the number of karaoke bars in each city, and this was then used to calculate the number of bars per capita (100,000 people).