The most resold trainers in the world, revealed

With trainers becoming more of a collectible than a fashion accessory, Uswitch sought to uncover which popular trainer models are the most resold online and which are most profitable.
Share this guide

Most resold trainers in the world header image.

It’s estimated that the global sneaker resale market could reach $30 billion by 2030, with an increasing number of shoe fanatics treating the latest trainers as collector’s items, rather than outdoor footwear.

Eager to gain an insight into the lucrative new trend of trainers being bought at retail price and later resold for profit, we conducted a study of the most resold trainer models in the world. We analysed the resales of each model on the leading resale platform StockX and discovered which of these top 20 best-selling shoes proved most profitable for sneaker resale enthusiasts.

The most resold trainers in the world 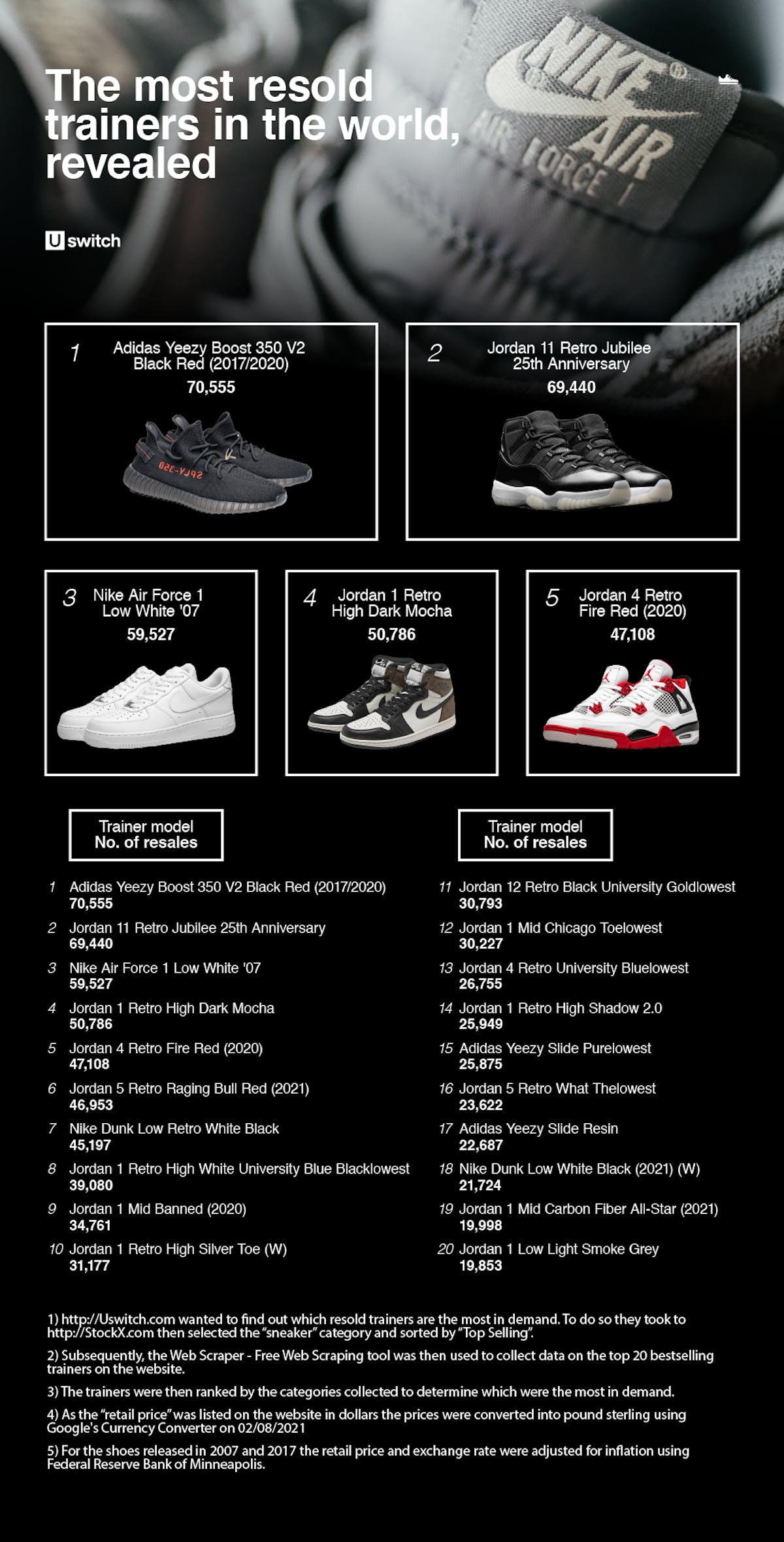 The Adidas Yeezy Boost 350 in black and red is the most resold trainer model of all on the StockX platform, with a staggering total of 70,555 resales. The model, released at the start of 2017 in collaboration with American rapper Kanye West, has an average resale price of £206 and an original retail price of £185.54.

Ranking as the second most resold trainer model internationally on StockX is the Jordan 11 Retro Jubilee 25th Anniversary model, with a total of 69,440 resales on the platform. Released at the end of 2020, the sleek black, white, and metallic Air Jordans were launched to mark the shoe’s 25th anniversary and have an average resale price of £149.

With 59,527 resales at the time of our study, the Nike Air Force 1 Low White ‘07 is the third most resold pair of trainers on the platform worldwide. This pair of trainers have an impressive average resale value of £105, which is more than double the retail price.

The fourth most resold trainer model on the popular resale platform is the Jordan 1 Retro High in dark mocha. This model had 50,786 resales and is being resold for £215 on average – a hefty increase from their £122.31 original retail price.

Meanwhile, the Jordan 4 Retro in fire red (2020 model) tallied as the fifth most resold trainer model in the world on the platform. The initial drop was in November 2020, making the 47,108 resales of the trainer style even more impressive.

The trainers with the most profitable resale price 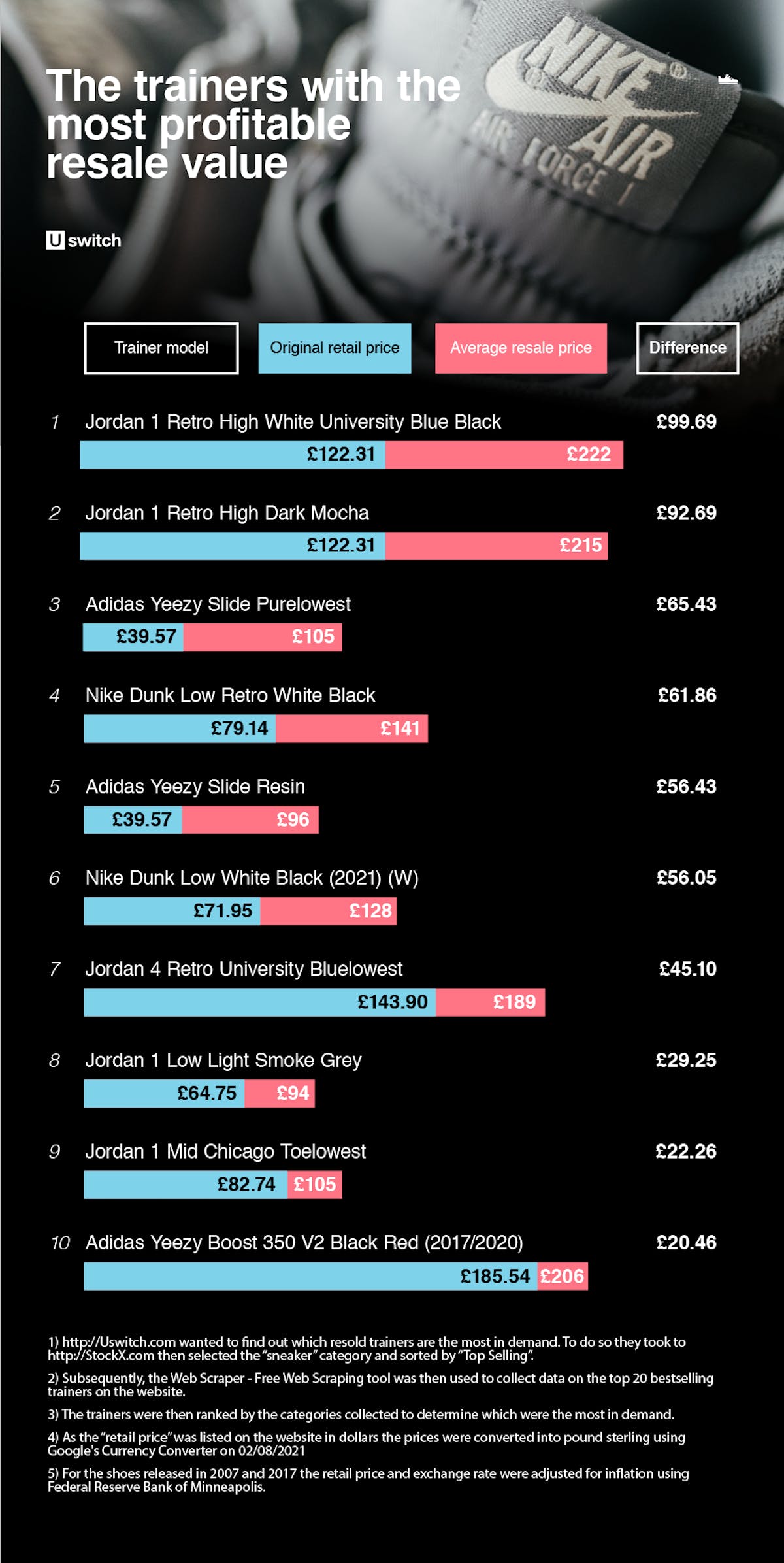 Table showing the most profitable trainers.

With an average resale price of £222, the Jordan 1 Retro High White University in blue and black is the most profitable trainer on StockX overall. This take on the clean design, favoured by basketball players and street style fanatics alike, was resold for around £100 more on average than its original retail price.

As well as being the fourth most resold trainer on StockX, the Jordan 1 Retro High in dark mocha was also the trainer model with the second most profitable resale price on the platform – at £215 on average. This is around £92 higher than the original retail price for the shoes, which is £122.31.

The Adidas Yeezy Slide Pure has the third most profitable resale price. This is because, despite only retailing for £39.57, the trainers had an average resale price of £105, which is an increase of £65.

The fourth most profitable resale price of those studied is the Nike Dunk Low in white and black. The average resale value of this pair of trainers is £141, despite originally only retailing for £79 – £61.86 less.

The model of trainers with the fifth most profitable resale price is the Adidas Yeezy Slide Resin, in collaboration with rapper Kanye West, which boasted an average resale price of £96 despite originally retailing at £39.57.

How to spot fake products

Here are some of our top tips when it comes to working out if a product is real or not before you buy:

1) Uswitch.com wanted to find out which resold trainers are the most in-demand. To do so, they took to StockX.com, the world leader in trainer resales, and selected the “sneaker” category before sorting the results by “Top Selling”.

2) Subsequently, the Web Scraper tool was used to collect data on the top 20 best-selling trainers on the website. The categories scraped were:

3) The trainers were then ranked by these categories in order to determine which were the most in-demand.

4) As the “retail price” was listed on the website in dollars, the prices were converted into pound sterling using Google's Currency Converter on 02/08/2021.

5) For the shoes released in 2007 and 2017, the retail price and exchange rate were adjusted for inflation using minneapolisfed.org.

6) All data refers to the top 20 best-selling trainers on StockX.