Hollywood’s most successful movie production companies of all time revealed

From rom-com to adventure, the biggest production companies in Hollywood have brought us some of the most iconic films ever. But with streaming services dominating our movie viewing, will they affect the future of these companies?
Share this guide

Over the last year, the use of streaming services have risen by 71% as UK adults tried to keep the movie experience alive while cinemas have been closed. And it’s not just customers that have been making the moves over to these streaming platforms.

Back in May 2021, Amazon announced that it had acquired MGM productions for an impressive $8.45 billion, with over 4,000 films including the James Bond franchise set to be available on the streaming service.

With this in mind, we analysed over 700 films from the 20 most profitable movie production companies to reveal which produces the most acclaimed films.

Many production companies have managed to rake in millions of dollars over the past few years. And they could see similar success again soon as 40% of Brits returned to the cinema after lockdown restrictions eased.

So, we set out to discover which of the biggest production companies have earned the most money from their big theatrical releases.

Taking 20 movie production companies’ profits from The Numbers, this is how much each of them has made on average from all of their movies combined. 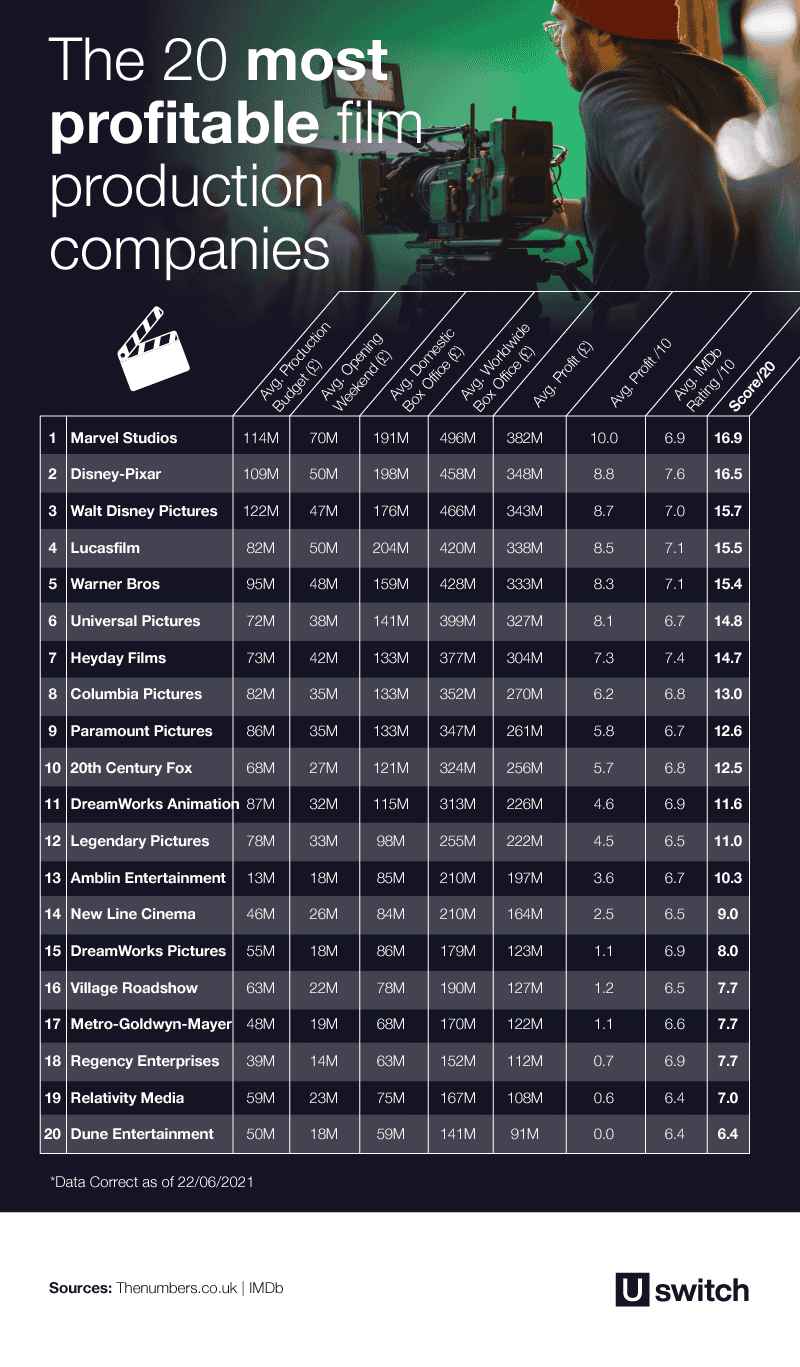 Table of the 20 most profitable film production companies

Topping the list as the most successful was Marvel Studios, who has made an average profit of £382 million across all of their movie releases.

Marvel has gone from strength to strength over the last five years thanks to the popularity of the iconic franchise, The Avengers. ‘Endgame’, the final movie in the series, made a staggering £2,034,273,028 through box office sales, and is still sitting in second place worldwide for the biggest profits.

Also making the top three most successful movie productions companies of all time were Disney Pixar, which has managed to rake in £348,236,578 on average across its 24 films, and Walt Disney Pictures, which earned an average of £343,487,777 in profit.

The best films by the biggest film production companies

We have been lucky enough to experience some of the most epic cinematic moments in history over the last 50 years. And IMDb reviewers have had their say on which one is their favourite.

With this in mind, we have taken 50 of the most successful movies from the world’s biggest production companies to reveal the highest-rated films of all time and how much they made on the box office opening weekend.

Table of the best films by Hollywood's biggest production companies

The highest-rated film in the study was revealed to be 2008’s The Dark Knight, directed by Christopher Nolan. On its opening weekend, the film made a whopping £115,220,592, proving popular among audiences. Not only this, but it also received an impressive score of 9/10 on IMDb by voters.

The film was one of the biggest cinematic releases of 2008, gaining critical acclaim from critics. And it was only the fourth film to ever make more than a billion dollars at the box office.

The study also found Peter’s Jackson’s The Lord of the Rings received high marks from fans on IMDb, with both the first and last film in the trilogy scoring 8.8 and 8.9 out of 10 respectively.

Other films that made the highest rated movies of all time include Schindler's List, which was produced by Amblin Entertainment and Universal Pictures, and scored 8.9/10. Meanwhile,2010’s Inception, also directed by Christopher Nolan, earned 8.8/10.

The directors with the biggest return on investment

Everyone knows a good director is pivotal to the success of a movie. But which directors promise the biggest return on investments for the cast and companies they’re working for?

Taking our initial seed list of 700 films, we compared the initial production budgets against the gross profit of each film to find which directors garnered the biggest pay check.

Movie posters of the directors that have made the most profit

First place was taken up by a trio of directors in what has been one of the biggest films of all time. Victor Fleming, George Cukor and Sam Wood, who teamed up in 1939 to direct Gone With The Wind, were revealed to have the biggest R.O.I. at 9,908%.

The film has come under fire in recent years for its depiction of ethnic and racial prejudices and has now been removed from multiple streaming channels including HBO.

In second place were Henry Joost and Ariel Schulman, who worked together on 2011’s Paranormal Activity 3. Seeing a healthy return of 4,038%, the movie has become one of the most profitable horror films of all time, alongside A Quiet Place and Annabelle - which also feature in this list.

Over the past decade, film franchises like The Hobbit have created high expectations for production companies releasing a new series of movies.

But with so many popular franchises out there, which one has made the most at the box office? Taking some of the most well-known film franchises of all time, we reveal which ones proved popular among fans and which have missed the mark.

Icons of the most successful film franchises

Topping the list was Marvel Studios’ The Avengers. Across its four films, the series has managed to tot up an average of £1,505,781,053 worldwide.

Not only that, but the series managed to surpass classics, including the Jurassic Park and Star Wars franchises. And it has even announced 13 new movies that will continue the Marvel Cinematic Universe through to at least 2023.

Other popular franchises included Warner Brothers and Heyday Films’ legendary Harry Potter films, which made an average of £698,196,976 in box office sales.

Ranking towards the bottom of the list was Disney Pixar and Walt Disney Pictures’ Toy Story films. Which, despite being family favourites, have made an average of just £555,151,218.

We all have a favourite genre when it comes to movies. But which film category has earned the most over the years?

Table of the top grossing genres

Coming out on top with 23 of the highest-grossing films was Sci-Fi. With an average of £436,795,100 per movie, films in the sci-fi category often had directors including George Lucas and J.J. Abrams featured on their credits roll thanks to the popular Star Wars franchise.

Second on the list was Family films, which grossed an average worldwide profit of £411,728,450. Looking at nine of the most popular family films including Beauty and the Beast, Home Alone, and Stuart Little, these films were most often produced by Walt Disney Pictures.

More Action films were made by the top 20 production companies than any other genre, with 244 films averaging £359,511,218. Meanwhile, the least profitable film genre was revealed to be Thriller, averaging just £102,414,465 across five films.

The most successful film companies of all time

Taking 20 production companies that made the most money at the box office, we have discovered which film companies are the most successful of all time.

This was compiled by taking the top movies that earned the most at the box office with a maximum of 50 films per company. We then determined their box office takings, budget, release date, genre, director, country, IMDb rating and age rating. These were found via the numbers, IMDb and Wikipedia.

Once each production company's financial takings were found, a ranking system was used to fairly score the average profit out of 10. Ratings from IMDb was scored out of 10, based on its average overall rating.

The highest-rated films by the top 20 production companies

We then found the highest-rated films from each of the 20 production companies and ranked them from best to worst depending on their IMDb rating.

The most successful directors were found by taking each director’s total production budgets for the films they have worked on from their box office total sales, to find their total gross profit. This was then divided against the average production budget to reveal the typical return on investment.

To find the most successful film franchises of all time, we took the box office sales from the numbers from each movie in the collection. Once this was found, the average box office sales for each franchise were calculated and then ranked from highest to lowest.

To find the top-grossing genres of all time, the average box office sales for each genre were calculated and then all genres were ranked from highest to lowest depending on their sales.

*Currency data correct as of 22 June.