Smart speakers vs UK and Irish accents - Which accent do AI assistants struggle to understand the most?

We’ve all been there. Asked our smart speaker to play a song just for her to tell us the weather, or find Google is talking to us after it’s misheard something we’ve said to our friends.

While smart speakers are certainly making our home lives easier (and making our broadband a lot more fun to use) they’ve still got some way to go before they make things seamless. With an estimated 1 in 5 UK households having an AI assistant in their home, it’s become clear there are some people who just can’t get their message across.

We wanted to understand who smart speakers struggled with the most. Our research took us to 30 cities throughout the UK and Ireland and got people there to have a chat with their smart speaker, letting us analyse which accents the devices failed to understand. Our volunteers asked their devices ten questions, before we gave each accent a score on how well they performed. 1 out of 10 means one error from the ten questions asked, for example.

We also explored how many searches people in these cities made for ‘Why doesn’t my smart speaker understand me?’ to create a full picture of the most difficult to comprehend accents for smart speakers.

The worst three cities for smart speakers all have something in common - instantly recognisable accents. While those accents might bring them cultural fame, they certainly don’t win any favours with Amazon and Google, and it’ll be no surprise to locals to see their names here.

Music on the Mersey must be a hard thing to ask for, with a whopping 1,700 searches a month for ‘Why doesn’t my smart speaker understand me’. The Scouse accent is known worldwide for being unique, but it clearly wasn’t taken into account when Amazon and Google were designing their AI assistants.

Glasgow is the second hardest city to understand

With a combined total of 1,550 searches for smart speaker accent issues and a voice samples score of 5, Glasgow takes second spot in our table. The thick Scottish dialect regularly requires subtitles on TV, but sadly AIs can’t read (yet), causing more than a few issues.

Edinburgh doesn’t fare much better, coming in at number six.

Cardiff takes the crown for most challenging accent

Taking the title for smart speakers not understanding them are the residents of the Welsh capital city, Cardiff. With a total of 1,550 understandability searches and a voice samples score of 7 out of 10, the city is the clear winner, beating the likes of Belfast, Newcastle and Dublin along the way.

Despite smart speakers being designed to pick up on different dialects, Welsh is clearly a step too far for the current stage of this advanced technology. 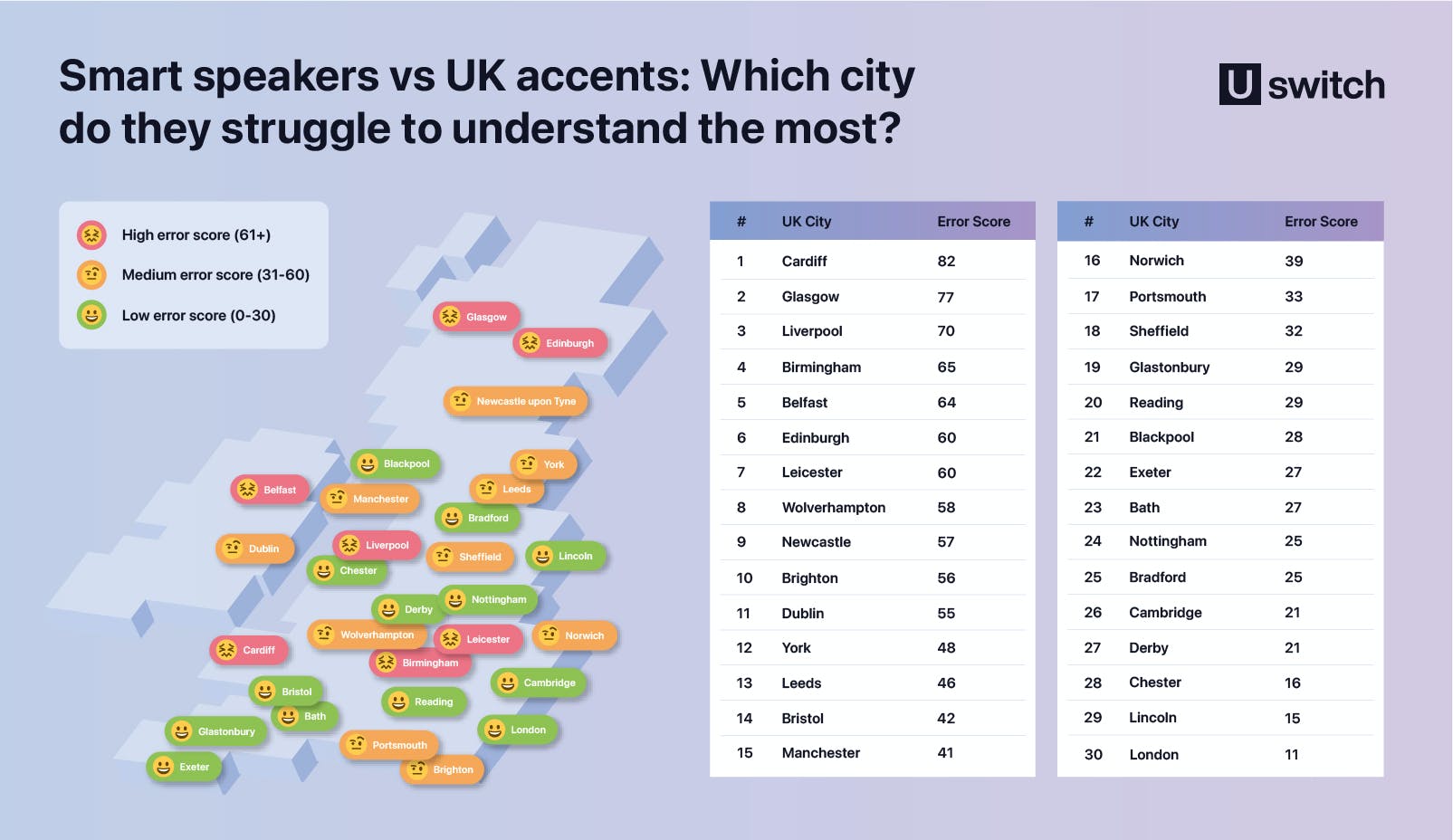 Our map highlights the hotspots throughout the UK for smart speaker confusion. You can see a clear north/ south divide, with southerners sounding clearer to Amazon and Google devices.

The clearest accent came from people living in London. With only 200 monthly searches for ‘Why doesn’t my smart speaker understand me?’ and a mere 75 for the same question of Google, it’s clear that the capital sounds crystal clear to its hi-tech housemates.

London also scored a 2 for voice samples, making it near perfect when it comes to pronunciation.

Lincoln comes in second for clarity

Lincoln, the city famed for its cathedral, came in second in our clarity league table. With Lincolnshire being a largely rural county, there’s no particularly strong accent to be heard of, making the voices there easy to understand.

Only offering a combined total of 467 searches for ‘Why doesn’t my smart speaker understand me’, and scoring only 1 error out of 10 on our voice clarity test, the Roman capital of the UK only loses out to its modern-day equivalent by a few points.

Despite sitting on the border of Wales, Chester comes in third place with only 450 combined searches for AI understandability and a score of 1 for voice samples.

The accent clearly doesn’t cross the border, with smart speakers having no problem picking things up.

Demand for smart speakers is highest in London

The capital city wants more smart speakers than anywhere else, with 8,000 monthly searches from people looking to buy one. As the devices clearly understand their accent, it’s no surprise to see them surge in popularity.

Nottingham (5,400) and Dublin (5,000) come in second and third respectively, despite the Irish city only scoring a 5 on our voice samples scale.

Google Assistant is also most popular in the capital

Londoners clearly love their voice assistants, as 5,000 search for ‘Google Assistant to buy’ every month. Nottingham comes in second place here too, with 2,000 searches a month. However it’s Belfast that takes the third spot on the podium, boasting 1,000 monthly searches to buy a device that 1,300 people claim doesn’t understand them.

What do we use our smart speakers for?

According to a recent report by the company Voicebot - who specialise in AI data - 82.4% of us use our devices to play music. However, that’s only our second most popular use of them, with 84.9% asking them to set a timer. It’s definitely a useful way to stop your dinner burning.

45.3% of us use smart speakers to update our shopping list, eliminating the need for carrying a notepad around the supermarket. 45.9% of us use them for something a lot less important than food, instead asking them to test our humour by telling us a joke.

Both Amazon and Google devices can also be a great way to control other devices in your home, whether that’s turning a light on or warming up a room. Worried you’re using those perks a little bit too much? It could be time you looked at switching to a cheaper energy provider.

"Smart speakers are becoming an integral part of many modern-day homes. While most of us find them useful it's clear that more needs to be done to make voice recognition features smoother. The use of artificial intelligence in products is only going to increase, and as it grows in popularity it's important that features are accessible to all. The more we use virtual assistants the better they will get at understanding us. Some brands are already taking steps to allow assistants to learn about our accents which should avoid alienating customers and improve user experience.”