The careers of Hollywood’s biggest names often take very different paths, with some branching out and appearing in many different types of roles, while others remain masters of their craft.
Share this guide 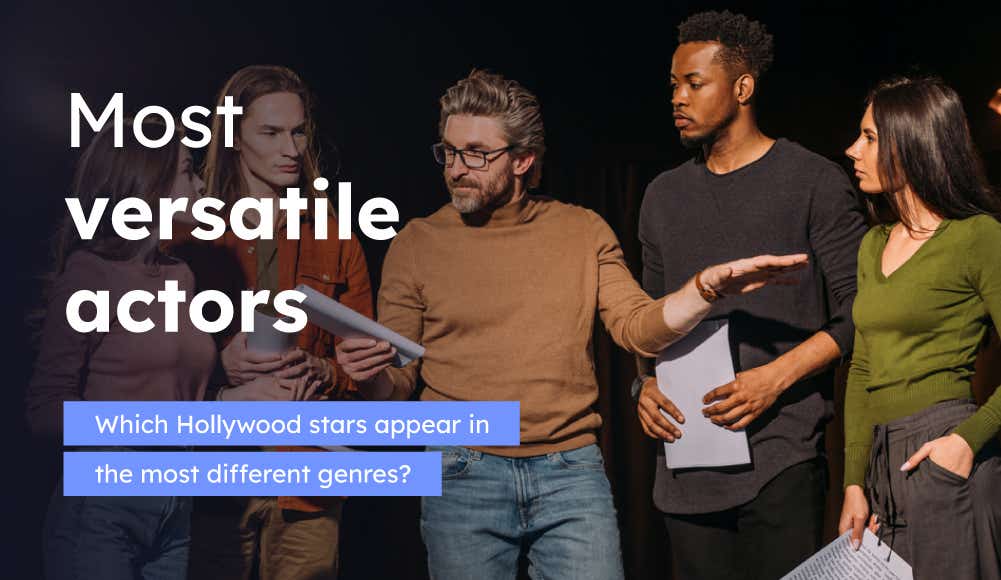 We all know about those actors who seem to slip into a completely different skin with every different film they shoot. Some of their colleagues, on the other hand, appear to have a particular talent for their specialist genre, or they may have been pigeonholed and typecast by the industry.

While there isn’t necessarily a right or wrong way to make your name, it’s undeniable that some actors have tried their hand at more genres than others over the years.

But which are the actors who have appeared in the most different genres? And who has carved out a well-defined niche instead?

If you want to check out some of the impressive work of these actors be sure to compare broadband deals to ensure you get the best streaming experience, or you even want to consider upgrading to ultrafast broadband.

Most genre-diverse actors in Hollywood 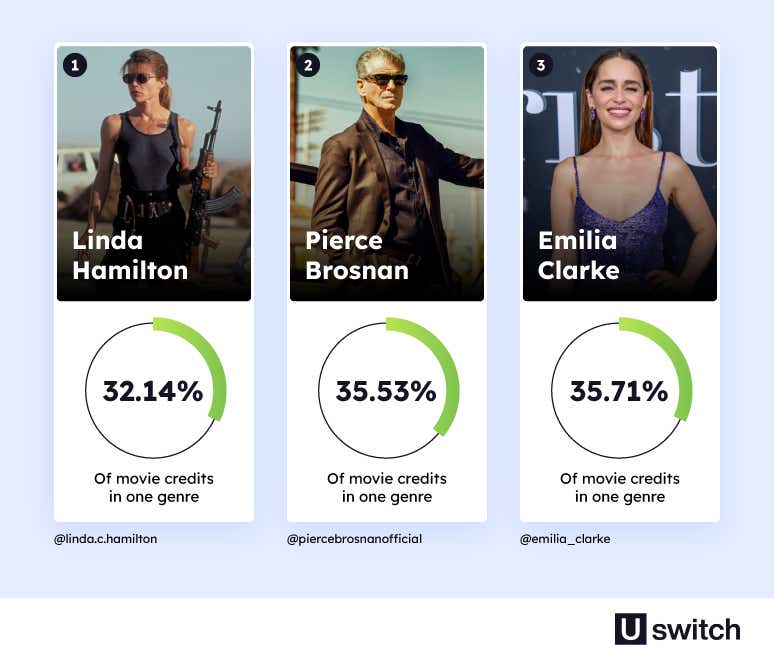 Despite being best known as one of the first female action stars, Terminator’s Linda Hamilton has the most versatile filmography of the actors studied.

While action is indeed her most common genre, it only accounts for just under a third of her filmography. To put that into context, one genre usually accounts for at least 50% of an actor’s repertoire, while some stick to one genre almost 100%.

The rest of her films are spread out across multiple genres such as drama, comedy, and horror.

Another actor who is instantly associated with one particular character, Pierce Brosnan has had a very varied career outside of James Bond.

His most common genre is drama but it accounts for just 35.53% of his total films. Other roles have included comedies such as Mrs. Doubtfire and musicals like Mamma Mia!.

Not far behind Pierce Brosnan is Emilia Clarke, previously known from Game of Thrones but now moving into the world of movies.

Interestingly, she played a younger version of Linda Hamilton’s character in Terminator Genisys.

But, as well as appearing in another sci-fi franchise (Star Wars), she has also appeared in romance films like Me Before You and Last Christmas.

Most genre-specific actors in Hollywood 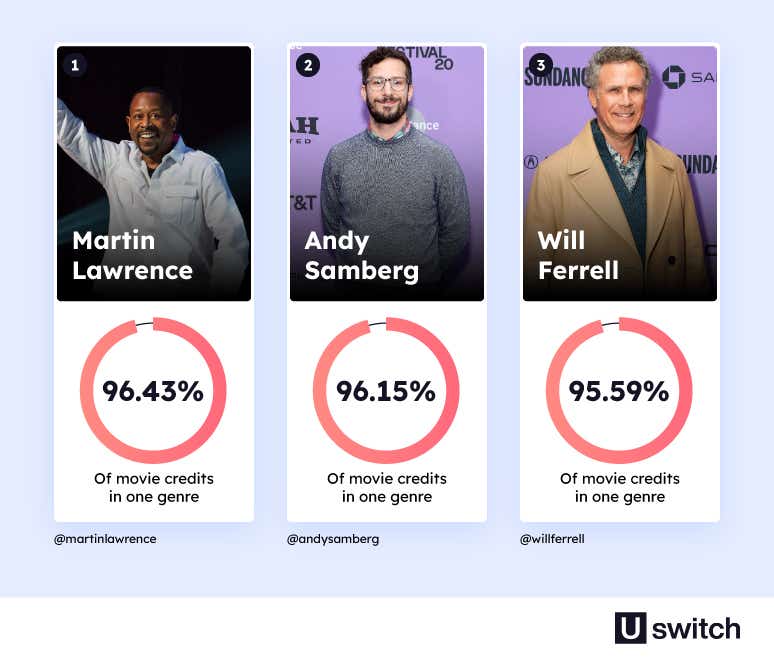 The list of actors who have mastered one particular genre is largely filled with comedians who have tackled few dramatic roles in their careers.

Topping the list is Martin Lawrence, who has 28 films in his filmography, just one of which isn’t a comedy (an upcoming thriller called Mindcage).

Another comedian is in second place, with 96.15% of Andy Samberg’s movies being comedies.

As well as live-action comedies such as Hot Rod and Palm Springs, he has also appeared in several animated family comedies too.

Like Andy Samberg, Will Ferrell started out on TV on Saturday Night Live before making a name on the big screen.

He’s appeared in some of the biggest comedy films of the 21st century such as Elf and Anchorman but has rarely taken on more dramatic roles.

The stars most associated with each genre

Looking specifically at different genres, the actor who appears in action films the most is Jet Li, with over 93% of his films falling into this genre.

The rest of the top ten reads almost like the cast list of an upcoming Expendables movie. Action movies make up over 80% of the filmographies of the likes of Chuck Norris, Jackie Chan, and Jean-Claude Van Damme.

As we’ve already established, comedy actors are the most likely to stay in their lane and stick to what they know.

As well as those that have already been covered, other actors who haven't strayed far from their comedic roots include Adam Sandler and Kevin Hart.

While the likes of Courteney Cox and Sarah Michelle Gellar, owe a lot to the horror genre, the actor who appears in it most is Lance Henriksen.

Henrikson played Bishop in the Alien franchise and also appeared in cult horror movies like Pumpkinhead.

The actor with the highest proportion of movies in the romance genre is Olivia Newton-John, with 58.33%.

The most famous of these is of course Grease, but the rest of her acting career has also been dominated by the genre too.

Looking at who are the most bankable actors by genre, there’s a very clear trend when it comes to action films.

Eight of the top ten have all starred in the hugely successful Marvel Cinematic Universe, with the remaining two also known for their parts in big franchises.

In the world of comedy, it’s Bill Hader who has pulled in the greatest box office revenue. While he’s had roles in successful films like Superbad, Trainwreck and others, it’s his role in animated family comedies that bump up the numbers.

Some of his voice credits include huge Pixar hits like Finding Dory, Inside Out and Monsters University.

The term ‘scream queen’ is commonly used to describe horror actresses, but Patrick Wilson is one of the first ‘scream kings’.

As well as playing demonologist Ed Warren in the Conjuring Universe, he also appeared in Insidious 2, all of which had big box office numbers.

In the romance genre, Julia Roberts is the bankable star, with her films bringing in over $1.24 billion.

Five of her films in this genre have grossed over $100 million, including Pretty Woman, Runaway Bride, and My Best Friend’s Wedding.

“Many people across the world aspire to be actors, yet only a small percentage end up making it big in Hollywood.

“It’s no surprise that actors such as Will Ferrell and Adam Samberg are among the most genre-specific, due to their personalities and abilities being perfectly suited for comedy.

“If you’re looking to revisit some of the comedy classics or watch some action packed films in all their glory, Uswitch recommends you switch to fast and reliable broadband, so you can host a movie marathon without having to worry about encountering problems.

“Without a superfast or ultrafast broadband connection, you may suffer playback issues, constant buffering or poor picture and sound quality.”

According to the figures above, the most versatile actor in Hollywood is Terminator’s Linda Hamilton.

While associated very strongly with her role in the sci-fi franchise, when delving into her entire filmography, she has actually appeared in a very wide range of roles and genres.

While this is largely subjective and depends on your own opinion, there are some hard facts that we can look at too.

While many publications have published their own lists of actors considered to be the greatest of recent years, we can also look at award wins.

Just a handful of actors have won more than one Oscar since the turn of the century: Daniel Day-Lewis, Frances McDormand, Cate Blanchett, Sean Penn, Renée Zellweger, Mahershala Ali and Christoph Waltz.

If we measure “greatness” by box office success, then the most successful of the 21st century include Leonardo DiCaprio, Samuel L. Jackson, and Dwayne Johnson.

The woman who has won the most Oscars for Best Actress (as well as having won the most acting Oscars overall) is Katharine Hepburn.

Her Best Actress wins were spread over a period of almost 50 years, starting with Morning Glory in 1933 and ending with On Golden Pond in 1981.

In addition to these wins, she was also nominated for a further eight Best Actress Oscars too.

In terms of the Best Actor award, the record is held by Daniel Day-Lewis, who has won the award three times.

He has been nominated for the award six times in total and is followed by nine other actors who have all won the award twice.

Looking at overall box office revenue in leading roles, then the number one actor in the world is Scarlett Johansson.

Having appeared in the hugely successful Marvel Cinematic Universe has played a big part in this, but she has also been in lots more highly grossing movies.

They include voice roles in The Jungle Book and Sing and Sing 2, as well as leading roles in Lucy, The Horse Whisperer and He’s Just Not That into You.

The filmographies of over 1,000 actors were analysed using IMDb, finding the genre of each feature film that each actor has appeared in. Actors with fewer than ten feature roles and those that have passed away were removed.

This was then used to calculate what percentage of each actor’s filmography was made of each genre and reveal the actors whose careers are most and least skewed towards one particular genre.

Note that most films have more than one genre listed on IMDb, so percentages for each actor will likely total more than 100%.